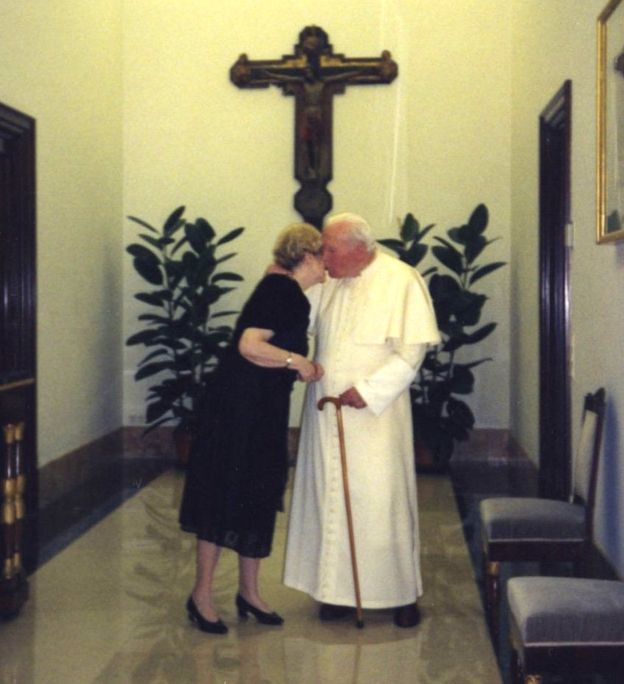 Popes have always been perceived to be not just representatives of God but also the holiest person on the face of the earth.  Catholics and non-Catholics don’t envision the Pope engaging in any untoward behavior especially of a sexual nature. The recent documentary by the BBC reveals that Pope John Paul might have been in a love affair with a married woman for 30 years has opened up speculations.

The woman that had a special place in the heart of Pope John Paul was Anna – Teresa Tymieniecka, a Polish-American philosopher.  She met the pope in 1973 when he was the Archbishop of Kraków and their relationship continued after he became Pope in 1974.

Letters from the heart — The BBC documentary revealed that Pope John Paul and Dr. Tymieniecka exchanged several letters during their 30-year relationship.  Excerpts shown below indicate two persons who if they were not romantically linked came close to blissful zone of romance.

After giving Anna -Teresa a sepular, he later told her that it allowed him to “accept and feel you everywhere in all kinds of situations, whether you are close, or far away”. He tells her she is a gift from God, and goes on: “If I did not have this conviction, some moral certainty of Grace, and of acting in obedience to it, I would not dare act like this.” In one letter he told her: “I am thinking about you, and in my thoughts I come to Pomfret every day.” And his letters include frequent references to their shared past. After his last visit to Poland in 2002 he wrote: “Our mutual homeland; so many places where we met, where we had conversations which were so important to us, where we experienced the beauty of God’s presence.”

Whether the Pope was in love with Anna-Teresa, the romantic expression of love is evident in the many letters he wrote her.  Some of the words clearly show a man who expressed similar feelings that Romeo expressed to Juliet.  Maybe the Pope was smitten by the attributes that Anna-Teresa possessed and described in the following text,

From an aristocratic Polish family, Tymieniecka was described by the author John Cornwell as being “sexually attractive, subtle, with great force of character”. “She spent hundreds of hours with him, sometimes with his secretary present, but often alone,” Cornwell wrote in his book, The Pope in Winter: The Dark Face of John Paul II’s Papacy.

The pope’s relationship with Anna-Teresa does not surprise me for two reasons.  They are humans with natural feelings like any other humans. The other reason is that I am familiar with a similar relationship involving a Catholic Archbishop of Jamaica and a woman in my native country of Jamaica.

In 1972 soon after I got married, my wife and I moved into a two-bedroom section of a house in Kingston that was owned by a woman in her seventies.  She lived in the other section of the house with her adopted daughter (a beautiful young woman in her early thirties Mary—not her real name) and the woman’s granddaughter who was about four years old.  The adopted daughter, Mary was the secretary of the Archbishop and they had a relationship that I found intriguing.

Every evening (except for Sundays), the Archbishop would visit his secretary around 8:00 p.m. and leave after 11 p.m.  Now I know that the lady and her granddaughter were long in bed so I wondered what the Archbishop and his young secretary were doing when they were together alone.

That Pope John Paul and the Archbishop of Jamaica love the company of women is easy to conclude.  In the absence of facts or evidence, we should not speculate about their relationship.  So what if these men blessed these women with their “holy water.” They are human beings as I alluded to before and are bound to have feelings and desires like us.

If we are tempted to let our imagination take us into the sexual fantasies that sometimes lurk in our minds, we should remember that Jesus had a relationship with Mary Magdalene.  She was said to be a prostitute prior to Jesus casting out seven demons from her.  She eventually became an ardent companion and Apostle to Jesus following Him everywhere He went.  It was also stated in the Bible that she washed Jesus feet with her hair.